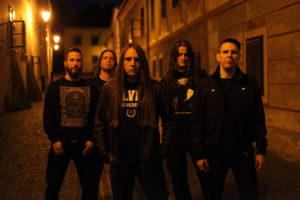 After releasing their eighth album Letters from the Edge last year, Hungarian atmospheric black metal band Sear Bliss will hit the road in 2019. As a kind of teaser they’ve released a new DIY video for the song called “Seven Springs” which appeared on the recent album. The video which was created again by the band’s guitarist, Attila Kovacs, using home, backstage and studio footage without any pomp added.

„While last year we spent most of our efforts on releasing Letters from the Edge, 2019 is going to be the year of shows and festivals to promote this album. We have never had so many gigs in previous years, we will have our first Hungarian tour and we will also go to places we have never been before. It seemed suitable to the occassion to create a video for one of the significant songs of the album, so Attila went through the enourmous amount of recordings we did during the last few years while traveling, rehearsing, recording with the band and used it to show how it looks from our perspective. The intention was to make a simple, down-to-earth video, nothing fancy – no budget, no setups, no poses, no hoods. Seven Springs is a powerful live song and this video was made to demonstrate it. See you all on the road soon!”

Confirmed tourdates for this year so far: