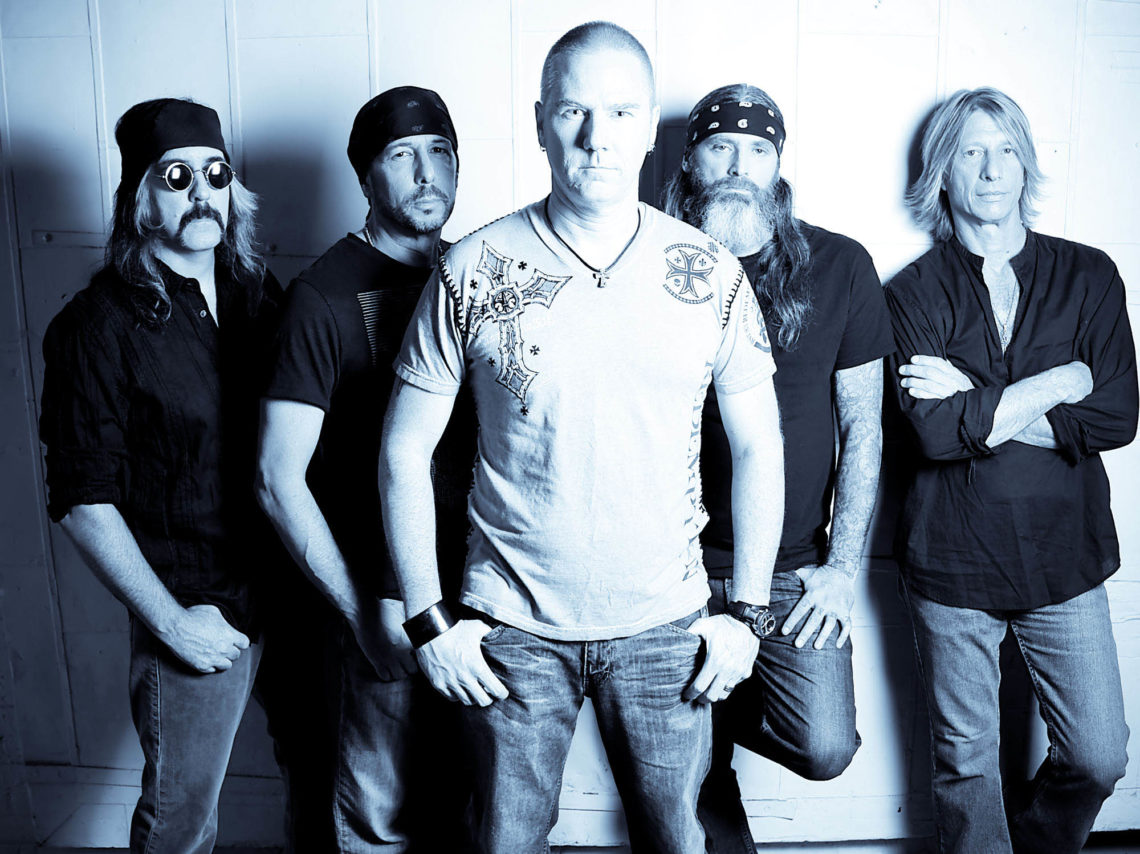 Rick Wartell formed Trouble in 1978 during his high school years, as the sole guitarist and singer for the band, joined by bassist Mike DiPrima and drummer Mike Slopecki. Trouble played their first show that year at Gordon Technical Institute in Chicago. After placing an ad in the Illinois Entertainer in 1981, Wartell revamped the line-up to include guitarist Bruce Franklin and vocalist Eric Wagner. The rhythm section changed shortly thereafter with replacement bassist Tim (Ian) Brown, and drummer Jeff “Oly” Olson joining Trouble’s ranks.

Trouble then spent two years honing their skills and defining their signature sound, drawing from musical inspiration from the likes of Black Sabbath, Judas Priest, Angel Witch, Lucifer’s Friend, Deep Purple, UFO, Uriah Heep, and NWOBM bands. Armed and ready, the band played legendary Chicago rock clubs such as The Thirsty Whale, Haymakers, and The Rusty Nail during the early 1980s, however it was their live performance at the Deaf Club in Aurora, IL on February 5, 1983 that served as the turning point in their musical careers. That particular show was recorded and was gaining popularity in the underground tape trading scene, which led to Brian Slagel at Metal Blade Records signing the band to the label.

Produced by Brian Slagel and Bill Metoyer, their eponymous debut Trouble (now referred to as Psalm 9) was released in 1984, featured 8 original Trouble songs, as well as a cover of “Tales of Brave Ulysses” by Cream. New bassist Sean McAllister (Witch Slayer) played on the album, contributing to it’s sheer heaviness. A groundbreaking album on all fronts, as evidenced by the combination of passionate, spiritual themes with fluid swings between slow and low doom tempos, and thrashy raw intensity which set the stage early for Trouble.

The Skull followed in 1985, comprised of more gloomy down-tuned, inventive riffs with the occasional nods to the psychedelic sounds of the late ’60s thrown in for good measure. Many of the songs on The Skull were in fact written during the same time as the material released on Psalm 9’s, however the overall mood is much more melancholic.
Touring followed however this led to the departure of drummer Olson, who was replaced by Dennis Lesch, and the replacement of bassist McAllister with Ron Holzner for 1987’s Run To The Light. Musically this album has it all, blending Wartell and Franklin’s menacing twin guitar assault of heavy guitar riffs with insane fast beats, before switching to doomier tempos. The music served as the perfect backdrop for Wagner’s emotional and bleak lyrics.

In 1989, Rick Rubin of Def American Records signed the band and they recorded a second self-titled album Trouble in 1990 with new drummer Barry Stern (formerly of Zoetrope). With Rubin producing, this was more experimental than previous efforts, the album expanded upon the group’s psychedelic notions within its traditional use of power chords. Released to magnificent reviews in all the major heavy metal rags, the album revitalized their career and they embarked on a yearlong tour that expanded fan base considerably and secured their legacy.

Manic Frustration was released in 1992 and sold almost 100,000 copies. The music delved into Beatlesque psychedelia and featured some of Trouble’s most aggressive, energetic performances ever. This release was yet another critically lauded, cult-raved heavy metal masterpiece that seemed to fly over the heads of mainstream fans that were deeply entrenched into the grunge movement.

The band took a hiatus before issuing Plastic Green Head through Century Media in 1995. The album marked the return of former drummer Olson and offered consistently strong songwriting that harked back to their original doom roots. The offerings were equally heavy and melodic, serving up groove-based rock with an edge. Included are covers of Carole King’s “Porpoise Song” and the Beatles’ “Tomorrow Never Knows” that demonstrate reverence to the original versions though the psychedelic and expressively doomy sound that is pure Trouble.
Vocalist Eric Wagner left the band soon after and was replaced by former Exhorder singer Kyle Thomas, who played several public gigs with Trouble. A strong connection would develop between Wartell, Franklin and Thomas, foreshadowing things to come.

After a 12-year hiatus, Wagner and Olson returned while bassist Chuck Robinson replaced Holzner on Simple Mind Condition, which was released in Europe in 2007 by Escapi Music. Fans eagerly embraced the album, which offered gut wrenching rhythms, dynamic solos, and incredible double leads infused with catchy grooves and strong lyrical content. The band also payed homage to one of their early musical influences, Lucifer’s Friend, with a cover version of “Ride the Sky”. The band toured internationally in support of its release however the album did not secure a U.S. release date for the album until 2009.

Unplugged was released in 2008 and served to present Trouble’s doomy and melancholic melodies via a more mellow and unapolegetically psychedelic vibe. The album features a combination of existing songs and previously unreleased material including a cover of the Yardbirds’ “Heartful of Soul”. The album would serve as the last offering by that line-up.
During the years between 2008 and 2012, Trouble toured intermittently with new members singer Kory Clarke (Warrior Soul) and drummer Marko Lira (former Trouble drummer Barry Stern’s protégé), however it wasn’t until February 2012 that the band assembled the line-up that would serve as the catalyst for their next studio effort.

The Distortion Field (FRW Music) was released in July 2013 to ardent fans and curious critics. The album charted on Billboard Top New Artist/Heatseekers (#25) and Top Independent Albums (#125), and ranked in CMJ’s Top 50 Loud Rock Albums (#48), received critical acclaim and was lauded by fans the world over. JAM Magazine summed it up by stating, “Trouble may have altered it’s line-up but they’ve served their lineage well with The Distortion Field, a true to the stone hard rock album that weaves melodic rock with the no-holds barred mentality of true metal. At the end of the day it’s worthy contender for Top 5 of the year.”

Shortly after the release of The Distortion Field, bassist Rob Hultz of Solace and Godspeed joined the band, and in doing so, solidified the quintet into the well-oiled, symbiotic creative force that is evidenced by their dynamic live performances.

Trouble has achieved a cult-like status within the music community, often referred to as the “musician’s musicians” due to their influence on contemporaries like Dave Grohl, Cathedral, Crowbar, D.R.I., and Phil Anselmo, to name a few. Appreciation for the band is as far reaching as the Indian Doom Metal scene, as demonstrated in the July 2013 issue of Rolling Stone India, which featured Trouble in their “Metal Heroes” Cover Story. The band has played in 20 countries and has shared the stage with some of the biggest names in music, such as Judas Priest, The Ramones, Scorpions, Slayer, DIO, Motorhead, Pantera, Testament, King Diamond, Megadeth, Savatage, and many, many more.
Trouble shows no signs of slowing down. The band is currently writing material for a new album intended for a 2019 release and has plans to hit the road.