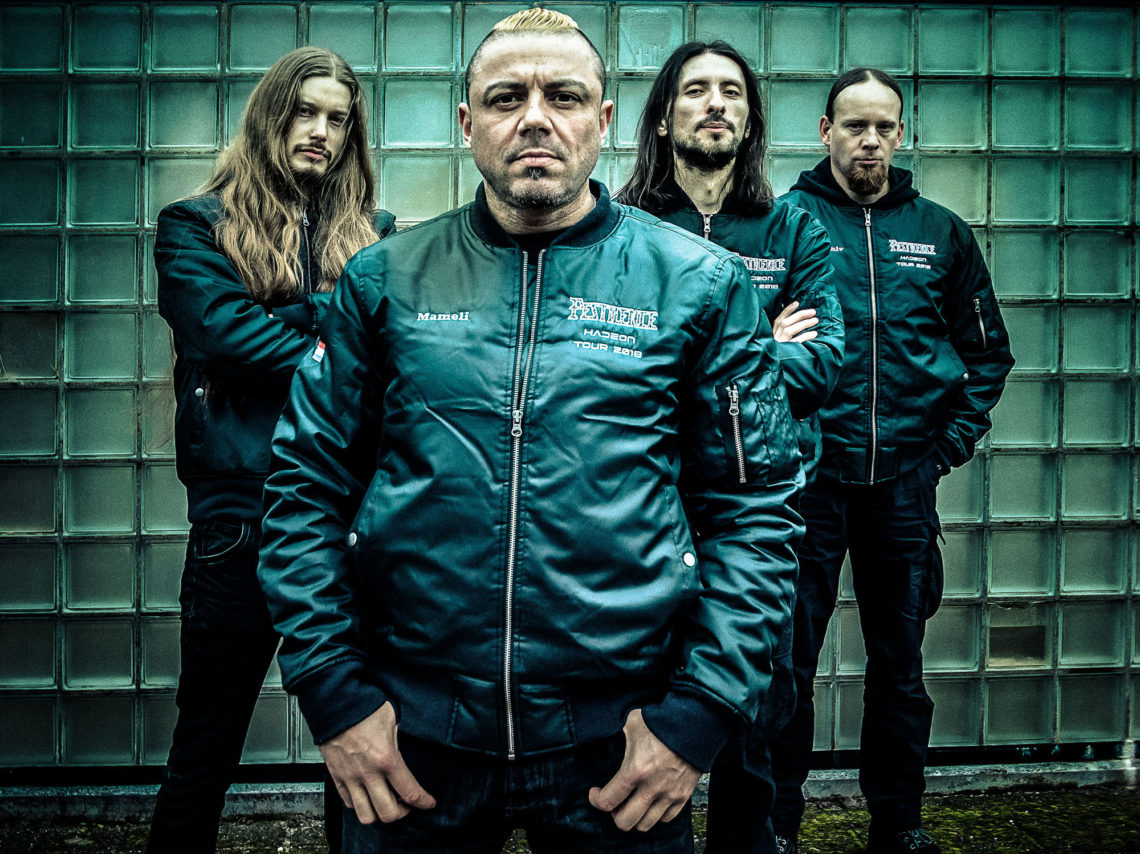 The start of Pestilence took place in the area of the Dutch/German border (Enschede) in 1986 and Pestilence started as a 3-piece thrash metal band. The lineup, consisting of Patrick Mameli (guitar, vocals), Randy Meinhard (guitar), and Marco Foddis (drums), consisted of youngster, full into the then vibrant Thrash Metal scene, ready to shred and drink beer. After their first demo called “Dysentery”, Martin van Drunen (bass, vocals, later also known for grunting for Asphyx, Bolt Thrower and Hail of Bullets) joined them. The two demos, both from 1987, “Dysentery” and “The Penance” were raw-sounding Thrash Metal attacks and sound mostly like a cross between Possessed, Slayer, old Sepultura and older Kreator. Pestilence became a Dutch flagship in the international tape-trading scene.

After hearing the 2nd demo renowed and legendary Dutch Metal label Roadrunner Records showed some interest and as a test Pestilence recorded a song called “Hatred Within” with Kalle Trap (a.o. Blind Guardian, Paradox) for the Teutonic Invasion part II compilation-LP. The song achieved many positive reviews and feedback was amazing.

Signing with Roadrunner was the next logical step as this label gained momentum with acts as Toxik, King Diamond & Carnivore. Pestilence recorded again with Kalle Trap and released their debut album, “Malleus Maleficarum”, in 1988, further refining their approach to thrash metal, and becoming leading in the genre, being seen as one of the most intense and brutal bands. The new material was way tighter and more focused than the demos.

Meanwhile, Pestilence recruited a new guitar player, Patrick Uterwijk, replacing Meinhard whom continued with Sarcosanct. In 1989, the band recorded with Harris Johns (a.o. Sodom, Helloween, Kreator, Voivod) and released their second album, “Consuming Impulse”, a big turn towards the then buzzing Death Metal scene. Musically, things became heavier and more haunting. With Roadrunner (together with Earache) being the Death Metal label then, all came together at the right time in in the right place. Vocally, Martin van Drunen moved away from the brutal thrash vocals in favour of a more acidic growl. With its release, Pestilence gained international attention (being at the forefront with Death, Obituary, Sepultura, Morbid Angel, Bolt Thrower, Autopsy), and became highly regarded worldwide by death metal fans. But before a follow-up album was released the lineup had to changeonce again; vocalist and bassist Martin van Drunen was forced to go and joined Asphyx to persue a succesful career in Death Metal.

Pestilence were faced again with the challenge of replacing a member, being without a vocalist and bassist. So while recording their third album “Testimony of the Ancients”, they enlisted bassist Tony Choy, who at the time was playing with the technical death metal band Cynic and Patrick Mameli took over the vocal duties. With this lineup, they released the classic Death Metal album “Testimony of the Ancients”. The new material was not as abrasive as the previous albums, but the band’s musicianship had obviously grown and the album had the best production job (done by Scott Burns in the famous Morrissound Studios in Florida) of the band’s catalogue. Pestilence was now among the top Death Metal bands, the demand was huge and succesfull touring took place, with a legebndary performance on Dynano Open Air.

However, Tony Choy was never a permanent member, and ended up going back to Florida to eventually play with Atheist. In the meantime, Pestilence enlisted the talents of Jeroen Paul Thesseling.

Over the years, the Pestilence members were getting into other forms of music, primarily jazz fusion which, the band wanted to pair with Metal. The band’s fourth album, “Spheres” was released in 1993. With every album, Pestilence went through some kind of a change and “Spheres” was no exception. Pestilence started to mix jazz fusion elements into their Death Metal style, and used guitar synths throughout the album. Upon its release some considered it a release far ahead of its time and genius, while others were close to hating it for what is was. Looking back it was just too far ahead of its time (and it influenced a lot of bands later on like Gorguts, Necrophagist, Obscura).

Pestilence’s popularity had risen with the release of each album, but unfortunately, so did tensions between the members. So after a short period of time, the band unanimously decided to split up, feeling they had reached their creative climax.

In 1994, Roadrunner released one last CD from Pestilence: a best of entitled “Mind Reflections”, containing tracks from all four albums, plus the rare song “Hatred Within” (originally released on the Teutonic Invasion Part II compilation) and six unreleased live tracks recorded in at the Dynamo Open Air Festival in 1992. Several smaller re-issues and minor releases kept being released in the years coming next, some semi-official, some shady, often consisting of live materials or re-mastered editions, most never with the permission of Patrick Mameli. In the future most of these recordings will be used as bonus materials in a much better version.

A long period of inactivity ended in January 2008, when vocalist/guitarist Patrick Mameli told the Metal press that Pestilence were back. The reunion line-up consisted of Mameli on vocals and guitar, Tony Choy on bass and Peter Wildoer on drums. Patrick stated: “As you know, I have always been the driving force behind Pestilence, writing all the music and so forth, so that I can state: I will bring back Pestilence to life. More tech and way more brutal than ever before.”

In 2008, Pestilence decided to write and record new music for an early 2009 release working with Danish producer Jacob Hansen. Titled “Resurrection Macabre”, it was their first original album in sixteen years. In March 2008 Patrick Uterwijk re-joined the band as second-guitarist. In March 2010, Pestilence announced their first US summer tour in over 16 years. The reformed Pestilence released another album entitled “Doctrine” in April 2011.

Although all these albums are different each they were all looking for the borders of Death Metal brutality and technicality. Some people followed the path taken, while to some old school people this was too much. The quality level was insanely high, but maybe not the easiest to get for all. Patrick moved away from the albums most cherished by the fans “Consuming Impulse” and “Testimony of the Ancients”.

On July 8, 2014, vocalist/guitarist Patrick Mameli announced that Pestilence was on a “permanent hold”, as he wanted to “concentrate fully” on his new project Neuromorph. Patrick had always been into creating the new and leaving the old behind, he had always been the creative force and it seemed for now the Pestilence book was fully written and closed and he was on his way to do other forms of innovative, extreme Metal.

On October 4, 2016, Patrick Mameli announced that Pestilence would once again become active. The new line up was announced, featuring Mameli on both guitar and vocals, Tilen Hudrap (Testament, Paradox) on bass, Santiago Dobles (Aghora, Cynic) on lead guitar and Septimiu Harsan on drums.

Early 2017 Hammerheart Records owner Guido Heijnens and Patrick Mameli has several very constructive meetings and decided to give the whole Pestilence history a glorious kick in the ass. The catalogue was taken under some serious re-construction ideas, fully reworking the classic four so-called Roadrunner albums, for deluxe re-issue on 2-CD and on high quality vinyl in top sounding quality, also leading to the idea to present the fans their ultimate wet dream, an old school set list for 2018. With the addition of Eternal Rock Music Agency as the experienced booking agency the puzzle became complete. This team is ready to strike!

Patrick had extremely strong material ready and recorded a full new album titled “Hadeon” in Spacelab Studios in Germany in the Summer of 2017. This album will be released March 2018, as a follow up to the promised old school tour across Europe in January/February 2018. This album is in a way the return to the, by many fans, desired return to the old school of Death Metal, but obviously Mameli will not just duplicate, there is still that fresh and progressive touch.

2018 brings many festival appearances and tours across the world.